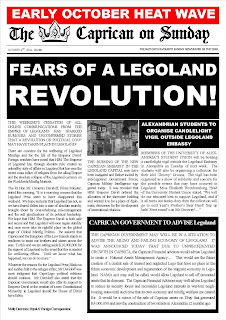 Alexandrian students celebrated tonight over the recent news that a new Lego state has been discovered!  It seems that the state of PBR may soon be in communication with the Empire of Caprica and the Kingdom of the Low Islands!  Caprica awaits a formal diplomatic invite from the PBR but rumours abound that HIM Tsar Ivan IV may well be bestowing honours in the new year if diplomatic ties are tied!  Caprica will be investigating ways of contacting the PBR in the next few weeks.
Posted by CNN at 13:16