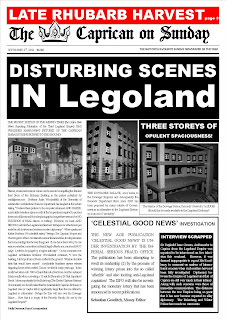 The ﻿University of Alexandria has dispelled the recent horrific scenes in the Legoland Capital as 'Artistic License' and has advised the Caprican and Low Islands populace to remain calm 'as usual' over events far beyond our Gallic Shores.  The Celestial Good News Editor is under investigation by the ISFO and it would seem some in Caprica have suggested the Dowager Palace be made into an Embassy for Legoland befitting the one burned down last week in the Legoland Capital.
On a more scientific note... His Grace the Duke of Liverpold announced yesterday the success of using electrical current to produce vast amounts of hydrogen that could be used in the production of 'Lighter than Air' craft.  Let us see what the future brings!  Deppelins! What a strange word that would bring to Capricans!
Posted by CNN at 12:54