Demonstrations and 'PIZZA RIOT' in Alexandria 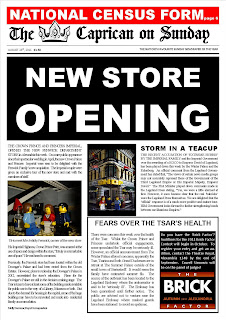 What a storm in porcelain teacup!
Never before in the History of the Empire have there been demonstrations!  Many are now arguing that diplomatic relations should never have been opened with 'Volatile' States!  The Caprican Twitter Network crashed last week with calls for a 'Pizza and Beer Fest' outside the Legoland Embassy!  The First Minister was outraged that TWO beer cans were thrown into the streets of Alexandria and NOT picked up by their drinkers!  The Government will be reviewing the 'Consumption of Beverages' Laws in the next Parliament.  First Minister Cameron Davidoff has stated, "Let it be known that these two vandals will face the full weight of the Law for their indiscriminate actions when they are found!"
﻿It was found out later that Miss Karina Coleburg, picked up both cans the following morning stating, "Oh, I am so sorry, I thought I had put the empty cans in my rucksack!  But there was a hole in the bottom!  The Pizza Party was WELL LUSH though! YUM!  I even had a bit of Lasagne, WITH CHIPS whilst demonstrating!"
Miss Coleburg was later given a full parden by the City Chief of Police and the First Minister.
Posted by CNN at 15:03