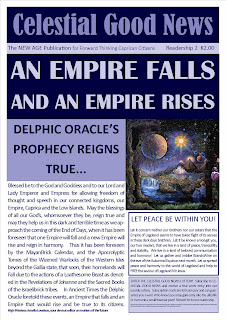 Some have come to say that the Free Press of Caprica is becoming a little 'too' free!  The Editor of the Celestial Good News is under investigation and the Caprican Twitter Network is under Police Surveillance since the 'Pizza Riot' (in fact a student party) outside the Legoland Embassy last week.
However, it emerged today that the Caprican Embassy in Legoland was burned down, an act of utter tragic violence that has horrified the Caprican and Low Island general public.  The Eulenbourg and the Winter Palace have not as yet made an official statement.
The Metropolitan Police of Alexandria are advising against new demonstrations outside the Legoland Embassy.  His Excellency, Mr Groons, Ambassador to Legoland will appear on a debate show with Mr Mikail Parkinovic this Saturday.  Mr Groons has made a full recovery and is expected to 'Make or Break' Caprican/Legoland Diplomacy this Saturday.
Miss Isabella von Worditch stated, "I was looking forward to the 'Give PEAS a Chance' demo!  Apparently this was going to be a VEGITARIAN party!  Honestly, the Legoland Embassy has brought fun to Alexandria and Alexandrian Students!  Before we only had the Fresher's Fair!"
Posted by CNN at 13:59