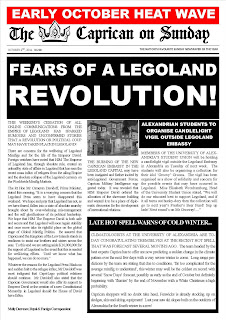 Concerns mount tonight over the safety of HIM Emperor David of Legoland and his minifigs!  The Caprican Government has also stated that it will work alongside the PBR if they are interested in bringing peace and harmony to all Lego minifig states.  Prime Minister Davidoff is awaiting further responses from the PBR and President Brik.   The Empire may well pledge financial support to maintain the recent peace in the PBR and thus build a more harmonious minifig global community.  President Brik may well find himself nominated for the Nouvelle Caprican Peace Award and gain himself an honourary Caprican Title in doing so!!
Please note, neither the Empire of Legoland nor the Caprican Empire is in any way associated with LEGOLAND﻿ or the LEGO Group
Posted by CNN at 11:55