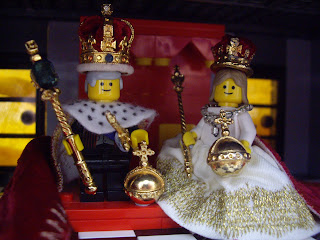 HIM Tsar Ivan IV Emperor of all the Capricas, King of the Low Islands
HIM the Tsarina Elizabeth, the Empress Consort
This picture taken on the event of the Imperial Coronation December 2009.  his Imperial Majesty, the Tsar wears the Imperial State Crown and Sword of State at his left side.  He holds the Sapphire Sceptre and Orb.  Her Imperial Majesty, the Tsarina wears the Imperial Consorts Coronet and the Alexandria necklace/tiara (this can be worn as a necklace or tiara, in the picture it is worn as a necklace) and holds the Consorts Sceptre and carries the Consorts Orb.
The Emperor is seen wearing full state attire with his Coronation Robes of State.  The Empress is wearing a gold embroidered state gown with Robes of State attached at the waist.
Posted by CNN at 13:00